The parish of Aldbrough is situated in what was once the wapentake of Holderness (middle division), part of the historical East Riding of Yorkshire (see maps in Introduction). Before the 1832 parish boundary changes it included the sub-parishes and localities of Bewick, Carleton, East and West Newton, Etherdwick Grange, Fosham, Owsthill, Ringbrough, Tansterne and West Hill. Aldbrough is not to be confused with Aldborough, a parish in the West Riding.

In Saxon times Aldbrough was a place of consequence. King Canute is said to have granted it to Ulph, who had a castle there. Following the Conquest, it passed into the hands of Stephen d’Aumale, Lord of Holderness, who gave the church and tenths of the castle to the Abbey of Aumale in Normandy. (No reference to the castle of Aldbrough later than 1115 has been found; it is assumed that it was lost to the sea.) Stephen’s son William le Gros, who succeeded him as Lord of Holderness and built the Abbey of Meaux there, granted it lands in Aldbrough. Much of the Aumale fee later passed to the Ros family of Roos and Helmsley, but their tenure ended with the death in 1441 of Sir Robert Ros for want of a male heir, the various manors and estates thereafter changing hands regularly until the present day. 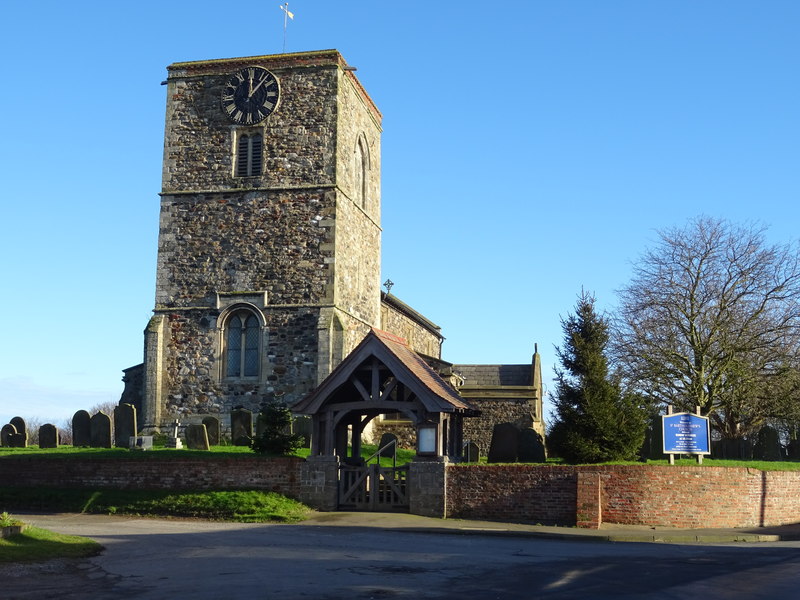 There was a church at Aldbrough by the 11th century, and the present one, dedicated to St. Bartholomew, seems to have been built out of the ruins of an earlier Saxon one, as evidenced by the door and window surrounds and the animal carvings. Further confirmation of its early origins is the sundial with its Anglo-Scandinavian inscription: “Ulf who ordered this church to be built for his own and Gunware’s souls”. Moreover, the long narrow nave probably preserves the plan of Ulf’s church. A 12th century chevron decorates the south door and the lower stages of the tower are early 13th century. In 1353 Sir John Meaux alleged that the sea threatened his ancestors’ remains in the church and was licensed to re-inter them in Haltemprice priory, near Cottingham, in which he founded a chantry in 1377 shortly before his own death. However, he requested that his own body be buried in St. Mary’s aisle in Aldbrough church, evidently the chancel chapel where two 14th century tomb chests bearing stone effigies of a man and woman are believed to commemorate him and his wife. Also in the 14th century the bells from Ravenser Odd chapel, which now lies beneath the mud of the Humber estuary, were brought to Aldbrough, and the old font that dates back to the 15th century stands disused at the west end of the nave. It is made up of a shallow basin on an octagonal pillar with a high moulded base and is said to have belonged to the church of Saint Hilda at Cowden Parva, now lost to the sea. Although considerably rebuilt in the late 19th century, the church at Aldbrough remains as a veritable memorial to the passage of time.