The parish of Beeford is situated in what was once the wapentake of Holderness (north division), part of the historical East Riding of Yorkshire (see maps in Introduction). Before the 1832 parish boundary changes it included the localities of Beeford Grange and Crowgarth and the sub-parishes of Dunnington and Lissett. The names Beeford, Dunnington and Lissett are Anglian, Beeford alluding to the proximity of a ford, Dunnington meaning Dudda’s farm, and Lissett probably signifying the dwelling near pastureland. 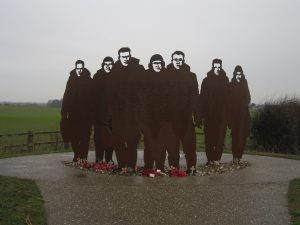 In 1066 Ulf was the holder of Beeford manor, half of his land lying in Beeford itself and the other half in Dunnington, Nunkeeling, and Winkton. By 1086 the manor had passed to Drogo de la Beuvrière, later becoming part of the Aumale fee. In the course of its history it passed through multiple hands, including the Knights Templar and the Knights Hospitalier, the crown and prominent local families, the latter frequently granting lands in this large parish to the religious houses of Bridlington Priory, Meaux Abbey, Swine Priory, Nunkeeling Priory and Newsham and Thornton Abbeys in Lincolnshire.

Dunnington and Lissett were also considered manors, the former being held by the Constables (13th-16th centuries), and the latter by the Ellerkers (15th-16th centuries) and the Hildyards (16th-18th centuries). Lissett is best known today as being the site of a standard three-runway bomber airfield that later became known as RAF Lissett. The resident 158 Squadron flew its first operational mission on the night of 11-12 March 1943, when ten aircraft were flown to Stuttgart, though one did not return. Operations continued up to the end of the war, when the squadron had completed a total of 250 bombing missions, suffering the loss of 144 aircraft and 851 airmen. The latter are commemorated in a metal sculpture in the form of the seven member crew of a Halifax bomber, designed and built in 2008-2009 by Peter Naylor of Hull, a former classmate of the author. 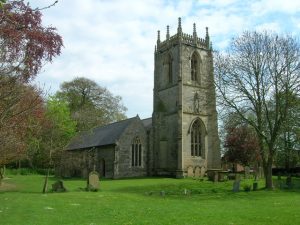 There was a church with a priest at Beeford in 1086. An unnamed chapel, apparently at Beeford, was recorded in the 12th century, and there are chapels at Dunnington and Lissett. The church at Beeford was dedicated to St. Leonard by 1407 and stands in a large yard planted with mature trees which was enlarged in 1948. The building is spacious compared to those in the area and is one of the richest in terms of architectural style. It comprises a chancel with a north chapel and vestry, a wide, three-bayed nave with north and south aisles, a south porch and a tower. There is little evidence of the 11th century building. The chancel was enlarged in the 13th century, and the north doorway to the nave, now reset in the aisle, was made or remade and another window added in the chancel in the 14th century. Extensive work was carried out in the 15th century and restoration and rebuilding continued into the mid 20th century.