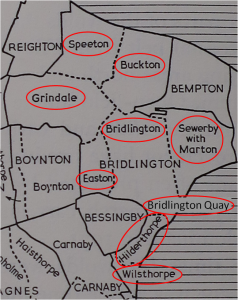 The parish of Bridlington (formerly Burlington or Bridlington Old Town) is situated in what was once the wapentake of Dickering, part of the historical East Riding of Yorkshire (see maps in Introduction). Before the 1832 parish boundary changes Bridlington included the subparishes and localities of Bridlington Quay, Buckton, Easton, Grindale, Hilderthorpe, Marton, Sewerby, Speeton and Wilsthorpe.

The name Bridlington derives from the Anglo-Saxon custom of attaching a personal name with a settlement type: Bretel, Bridla or Berhtel plus the ubiquitous –ingtūn. The jury is out on “ing”, but “tūn” is widely accepted as meaning farm, village or estate.

There is archaeological evidence of habitation in Bridlington dating from the Bronze Age. The Romans built a straight road across the Wolds between York and Bridlington, and it is reasonable to assume they also built a station or camp at the seaward end, but any remains have been lost to the North Sea over the ensuing centuries. Little or nothing was recorded before the Conquest, but it is known that Bridlington was the centre of a great royal Anglo-Saxon estate, held in 1066 by Morcar, Karli and Thorkil. Morcar rebelled against William the Conqueror in 1072, and his lands were given to Gilbert de Gant, a Flemish nobleman and the king’s nephew, and by Domesday William I was tenant-in-chief of Karli’s lands, and Robert of Mortain tenant-in-chief of Thorkil’s. The Mortain estate later passed to the Paynels and then to the archbishops of Canterbury. Early in the 12th century Walter de Gant, the son of Gilbert de Gant, founded Bridlington priory, endowing it with his estate, and by the end of the 13th century the priory was also holding lands of the Canterbury fee. It retained them until the Dissolution when they were forfeited to the crown in 1537, and thereafter various parcels of the priory’s vast property were leased.

One of the lessees was Robert Pykerynge / Puckering, gentleman, the crown’s bailiff at Flamborough and an early member of the Puckerings of Flamborough. In 1538 he received all the tithes belonging to the chapels of Bempton, Newsham, and Speeton (see below). In 1547 a Robert Pykeryng, gentleman, sold his lands in Sedbergh, then in the West Riding (now in Cumbria), to Ann Knyvett (née Pickering), which suggests that, if the two Roberts are one and the same, he and Ann were members of the Pickerings of Killington and the Flamborough Puckerings – and in all probability all the Puckering families – are offshoots of the Killington Pickerings. 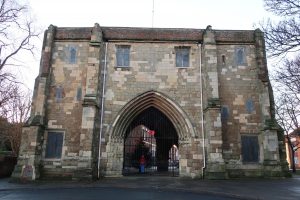 The manor of Bridlington itself and the rectorial estate passed through various hands – too many to enumerate here – including the Stanhope and Fairfax families, who were related by marriage to the Pickerings of Barlby and the Pickerings of Oswaldkirk respectively.

A church already existed at Bridlington in 1086. It is likely that it stood on the site chosen for the Augustinian priory, which was confirmed by Henry I in a charter dated 1113-14, and where Walter de Gant established canons regular “by the authority and consent of King Henry, for his soul and the souls of his father and mother, and the souls of my father and mother, and my souls, and the souls of my friends”. In the days of its medieval glory Bridlington priory was one of the great monastic houses of England. It covered a large area of the Old Town and included the chapter house, prior’s hall, cloister, dormitory and infirmary to the south of the church, and farm buildings and the malthouse to the north. The priory acquired lands in many parts of Yorkshire and Lincolnshire, and the wealth derived from the wool trade enabled the canons to build a new church in the 13th century. However, the work remained incomplete 300 years later, and was halted at the time of the Dissolution. The execution for high treason in 1537 of William Wode, the last prior, on the charge of engaging in the rebellion in the North and East Ridings, marked the end of the monastic community and any further building work. By 1539 the buildings were in ruins and the Augustinian canons dispersed. The only surviving edifices were  the nave of the priory church, which was spared to serve as the parish church, and the Bayle gatehouse, now standing somewhat forlorn in the south-west corner of the former complex.

The most illustrious of Bridlington’s priors was John of Thwing (prior 1362-1379). He was a devout man who gained renown for the miracles he performed during his lifetime and especially after his death. His grave became a place of pilgrimage which led to his elevation to sainthood in 1401, the last saint to be created before the Reformation, taking the name St. John of Bridlington. His shrine was erected in a chapel behind the high altar, at the eastern end of the choir, but it was dismantled during the Dissolution and the jewels and plate sent to London. In 2015 a carved stone was placed in what is now the graveyard on the approximate site of St. John’s shrine with the words (translated from the Latin): “O Holy Prior of Bridlington, follower of a chaste life, pray for us.”

Another more modern touch takes the form of two corbels on either side of the entrance to the prior’s former lodging, at the half way point of the south side of the church. They represent Charles, Prince of Wales, and his wife Camilla, Duchess of Cornwall and commemorate their visit during the Priory 900 celebrations in 2013.

An earlier more poignant memorial is dedicated to all those who perished during the Great Gale of 10 February 1871, when numerous ships were wrecked and more than seventy seamen were drowned, including six of the nine man lifeboat crew. It stands in the north-east corner of the graveyard. The graves of three of the crew whose bodies were recovered lie in the shade of a beautiful tree in the graveyard on the north side of the church.

Robert Pickering was one of the nine man crew of the lifeboat, the Harbinger, when it set out for a seventh time on the day of the Great Gale. A brig called the Delta was in difficulty, with one man left clinging to its rigging after seeing his colleagues’ boat capsize and all aboard drown. It was while the Harbinger was alongside the brig, with the crew imploring the seaman to jump, that it was struck by a huge wave which threw it into the air and rolled it over. Oars and men were flung into the sea, but Robert Hopper and John Robinson managed to clamber onto the upturned hull. Pickering made increasingly desperate attempts to join them but was continually washed back by the waves. Hopper tried to pull him up with his scarf but, just as Pickering grabbed its free end, the scarf was wrenched from his hands by the lifeboat turning over once more and righting itself. Pickering was never seen alive again. On the evening of 22 February his body of was found at Barmston. Five other crew members – John Clappison, Richard Atkin, James Watson, David Purdon, and William Cobb – also perished during that final fateful rescue attempt. Coxswain John Robinson survived by securing himself to the Harbinger‘s lifelines, and Richard Bedlington, who had remained in the lifeboat when it capsized, was found clinging to its inside when it righted itself. Robert Hopper – and his scarf – also managed to survive. Without oars the three survivors drifted at the mercy of the wind and waves until they were miraculously washed ashore at Wilsthorpe.

Lifeboatman Robert is the only Pickering buried in the priory cemetery, but many other Pickerings, two Puckerings and a Puckrin currently have their final resting place in Bridlington cemetery. They are drawn from diverse families who migrated to the town from other parts of Yorkshire and beyond, the first recorded family being the Pykerings, who became later the Puckerings of Flamborough (see above). They were followed by members of the vast Pickerings of Holderness family, and their offshoots in Kilnwick and Barmston, the Pickerings of Scalby and the Pickerings of Malton.

Two subparishes of Bridlington also have connections with the Pickerings: 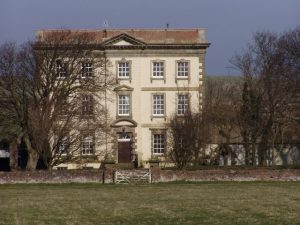 Buckton was recorded in Domesday as including much land in Bempton and Newsham and the early ownership of the capital manor mirrored that of Bridlington. The main family took the name Buckton and held lands there of the Meynell fee from the mid 1200s to the mid 1500s. When it died out in the male line, the lands passed through various hands until they came into the possession of the Robinsons who built Buckton Hall in 1744-5. The house originally had a double pitched roof which ended in twin gables, but following a fire in 1919, it was replaced by a flat roof. The early ownership of the second manor at Buckton also reflected that of Bridlington, coming into the possession of the Constables in the early 1500s.

It is, however, the crown estate that points to a circumstantial link with the Pickerings / Puckerings, albeit a tenuous one. An estate in Bempton, described in Domesday as under Buckton in 1086, passed to the Brus fee in the early 12th century and remained part of it until the 15th century. The Mauley (or Merlay) family held a mesne lordship of this land in the mid 13th century, but for want of a male heir, it was divided between three daughters, one of whom married William de Greystoke. The Greystokes were still receiving rent from their property in Buckton in 1418, and it is possible that Ralph Puckering who was born in nearby Bempton in c1510 was given the name that occurs the most frequently among his noble neighbours, thereafter becoming a recurring name among the Puckerings of Bempton.

Speeton was recorded in Domesday as having two estates, one held by King William and the other by Count Robert of Mortain. They subsequently passed to the Gants, Gilbert de Gant giving lands in Speeton to Bridlington priory in the late 12th century, and thereafter passed through various families until modern times.

Following the Dissolution Robert Pykeringe (see Bridlington above) was leased “all tithes belonging to the chapels of Bempton, Newson, and Speton, Yorks., late parcel of the monastery of Birlyngton, Yorks., and now in the King’s hands by the attainder of William the late prior; for 21 years, at rents of 14l. 10s. for Bempton, 50s. for Newsom, and 53s. 4d. for Speton”. The lease was renewed for another 21 years in 1568. Another incident involving a Pyckering occurred earlier, between the years 1504 and 1515, when *Robert Wille, the then prior of Bridlington, accused Thomas Pikering / Pyckering of Flamborough of “forcible entry and assault on (his) servants at Speeton”. Thomas is assumed to be the founder of the Puckerings of Bempton mentioned above under Buckton.

Speeton has a delightful stone church, “built by the Saxons, used by the Danes and restored by the Normans c1100”, according to an inscription in the church. The font dates back to Saxon times and stands next to a Danish alter cross embedded in the north wall, and the nave and chancel are separated by an early Norman arch. The building stands in splendid wind-swept isolation between the cliffs that descend to North Sea and Speeton Manor, and is surrounded by pasture land for herds of sheep.

*Robert Wille was prior from 1442 to 1462. If the dates are correct, the plaintiff was either John English or John Hompton.