The parish of Bishop Burton is situated in what was once the wapentake of Harthill (Hunsley Beacon division), part of the historical East Riding of Yorkshire (see maps in Introduction). It includes the locality of Killingwoldgraves. In 1939 Bishop Burton was adjudged to be one of the twelve loveliest villages of England. 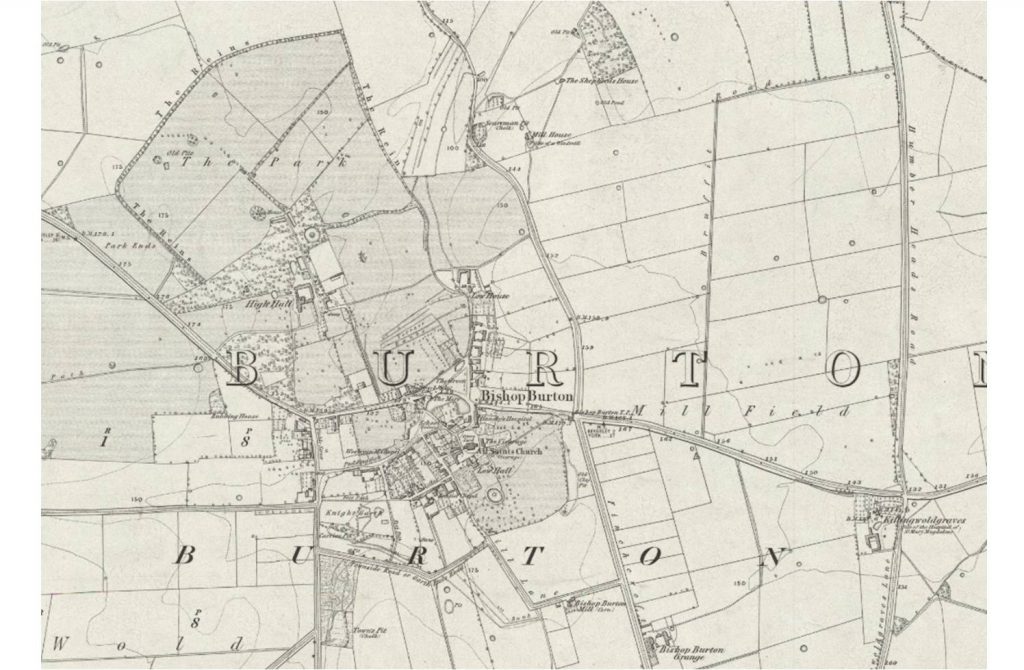 Map of Bishop Burton and Killingwoldgraves, with High Hall and Low Hall, 1852

The well-wooded country above the marshlands of the Hull valley on which Bishop Burton is situated already proved attractive to people in ancient times. Tumuli (prehistoric burial mounds) have been found to the west and south of the village, and the implements and urns they contained are now in the British Museum. A Bronze Age henge (a circle of wooden posts with a central platform) was discovered in the same area. The site also became a place of settlement in Roman times, two Roman tessellated pavement having been discovered in 1721 and Roman coins found in 1892.

It was as an Anglian settlement that the village became known as Burh-tun (a fortified manor). From c1200 as took the name South Burton or Burton next Beverley to distinguish it from its northern neighbour (North Burton, now Cherry Burton). It acquired its modern prefix in the early 14th century with reference to the ownership of the chief manor by the archbishops of York.

Before the Conquest Puch was the local earl, and Bishop John of Beverley, invited to consecrate a church on the earl’s lands in c700, is said to have healed his wife who was suffering from a grave illness. In 1066 the estate belonged to the archbishop of York, one of twelve in the East Riding given to the See of York by King Athelstan, and in 1086 it was held under the archbishop as a berewick (an outlying estate) of Beverley by the canons of St. John’s college. It was described as a manor in 1216. The archbishop was declared sole lord in 1316, a position he already occupied in Beverley, which meant that the destinies of both places were closely linked. He held most of the lands in Bishop Burton, the rest of the estate being leased to prominent local families. Successive archbishops regularly visited the village and made much use of their residence there in the 13th and early 14th centuries. In 1542, following the Dissolution, Archbishop Lee surrendered the manors of Bishop Burton and Skidby, along with his possessions in Beverley, to the crown, in return for scattered monastic lands of far less value in Rievaulx, Byland, Mount Grace and Newburgh in the North Riding. Thereafter the manor of Bishop Burton passed through many hands, including the well-known families of Gee and Watt (whose origins lay in Leicestershire and Liverpool respectively). 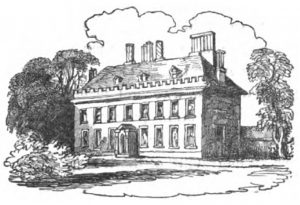 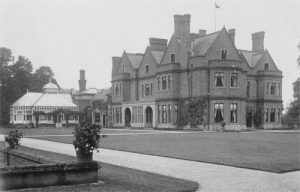 The site of the archbishop’s palace / manor house is not known. It was thought to have been situated in the area called Knight Garth to south of the church, where earthworks remained in 1977, or on the site nearby where the rectory house / Low Hall stood until c1855, but recent archaeological evidence points to it having stood on the site north west of the village where High Hall was eventually built. Both the manor house and its chapel were recorded in 1340, but the house was described as ruinous in 1388. Over the centuries it underwent rebuilding at least twice and also enlargements by its successive owners. By the time High Hall was sold to the County Council in 1951, it had been transformed into a large red brick house in the Tudor style. The Council demolished it and the East Riding Institute of Agriculture, later the Agricultural College, now stands in the wooded parkland that had surrounded the former manor house.

All Saints’ church stands on rising ground south of the mere (now the pond) and the green. The first building dates back to the 8th century, Earl Puch being its founder and Bishop John its consecrator, if a later embellished version of Bede’s Ecclesiastical History is to be believed. The Dean and Chapter of York had the living in 1194, but the incumbent was the vicar. The ordination of the vicarage dates back to 1264, and a complete list of vicars from 1349 onwards hangs in the church. The present fabric of the church is the result of two major 19th century building campaigns, which has made tracing its medieval development difficult. No remains of the Norman period have been found, perhaps because there is reason to believe that the church underwent an extensive building programme in c1240, following the work carried out on Beverley Minster. The Early English Gothic tower dates from this period and survives virtually intact today. The nave shows signs of being early 13th century and the aisles 14th century. High on the west wall are three hatchments that depict the heraldry of three previous owners of the estate: the Dean and Chapter of York, William Gee and Richard Watt. 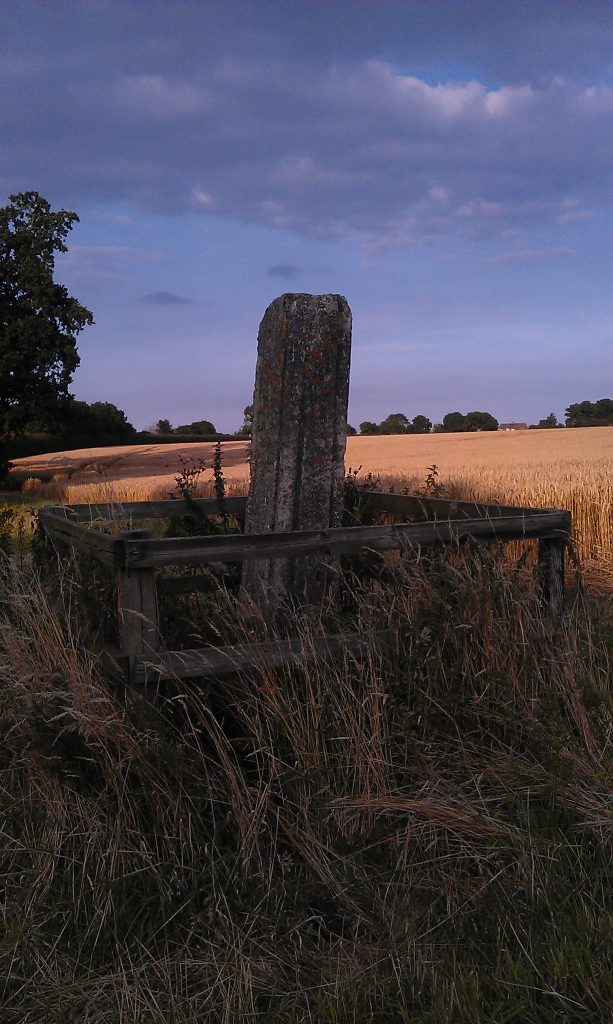 The name Killingwoldgraves derives from Cynewald’s copse or Cynewald’s trench. The hospital of St. Mary Magdalene that was built on this site was founded before 1169 and run by a community of nuns as a hospice and hostel for the poor and wayfarers, and no doubt also for the pilgrims to the shrine of St. John at Beverley. After the Dissolution the house and its possessions were granted by the crown to various prominent local families. A large 18th century farm house was still standing on the site of the original hospital in the 1960s, but has since been replaced by business premises.

Some yards to the south and at the midpoint of the road that links Bishop Burton with Beverley stands the remaining shaft of a tall stone cross, one of four that marked the limits of the sanctuary of Beverley Minster, a privilege granted to wrongdoers by King Athelstan in 938. It bears an illegible inscription which formerly read “pray for the soul of Master William de Waltham”, perhaps referring to the canon of the Minster of that name (d1416).

Members of a junior line of the Pickerings of Oswaldkirk were residents of Bishop Burton during the first half of the 1500s. John, who was buried in the village in 1565, founded the Pickerings of Holderness, and it is likely that he still has descendants living in the area. John’s younger brother Anthony was clerk to Richard Smethley, whose daughter Elizabeth married Sir John Ellerker. The Ellerker family had held the manor of Threekingham in Lincolnshire since 1410, and it was leased to Anthony Pickering and his wife in 1550. This marked the beginning of the Pickerings of Threekingham. A memorial brass in a slab on the floor of the chancel of All Saints’ church begins with the inscription:

A more recent connection between the Pickerings of Oswaldkirk and Bishop Burton was established in the 1990s, when the author’s sister took up a teaching position at the Agricultural College.